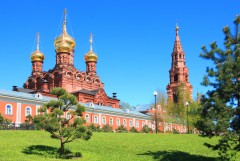 The Gethsemane Chernigovsky Skete was founded in 1844 by St. Philaret (Drozdov), Metropolitan of Moscow, and St. Anthony (Medvedev), Vicar of The Holy Trinity-St. Sergius Lavra. A skete is a monastery that is situated far from towns and allows a relative isolate for monks. Our Skete is located 3.5 km to the North-East from Lavra, in a place previously called Korbukha (from Finno-Ugric: a dense coniferous thicket), a picturesque pine forest. There used to be a summer residence of Russian Empresses on this place in XVIII century, but in 1796 it was closed down and soon destroyed by nature. Thus, when the first monks came to Korbukha thick woods covered the place.

In 1847, God’s fool Philipp came to the Skete and founded a Cave Dwelling just across the Bethany ponds. The caves were created in the image of those, which Philipp had once seen in the Kiev Pechersk Lavra. The main cave church was consecrated in honour of Archangel Michael on September 27, 1851. Soon after it, Philipp was forced to leave the Cave Dwelling. He founded another monastery, 500 meters to the West from the Skete. It was called Kinoviya (from Greek: κοινός — common, and βιός — life) and the main church was consecrated in honour of the Bogolyubskaya Icon of the Mother of God. A graveyard for monks from Lavra was organized there.

A cathedral in honour of the Chernigov-Gethsemane Icon of the Mother of God was built around the old wooden church upon the caves. It was a project of a famous architect-engineer, Nikolai Sultanov. The cathedral was consecrated on August 26, 1893. The Cave Dwelling, separated from the Gethsemane Skete by the Bethany ponds (nowadays, the Gethsemane ponds), became known as the Chernigovsky Monastery.

A tomb with the relics of St. Barnabas (Merkulov) is placed in the cathedral. St. Barnabas came to the Skete and became a monk in 1851. He was a metalworker and a guide for the pilgrims, who came to see the Caves. In 1873, he was appointed elder confessor and as he was very kind and clever lots of people came to him. Usually he heard confessions of 500 people a day and even more.

St. Barnaba maintained an extensive correspondence with his spiritual children and the monks of the Iversky Convent, which was founded by him in the town of Vyksa in 1863. St. Barnaba reposed in the Lord in 1906 in the altar – in front of the Holy Table and with a cross in his hands. He was buried in a chapel in honour of the Iverskaya Icon of the Mother of God. In 1990s, the relics of monk Philipp, the founder of the Cave Dwelling, were brought to this chapel.

In 1920s, the Gethsemane Skete and the Chernigovsky Monastery were closed down. In 1950s, the territory of the Skete was given to the military department and, by the decision of the latter, all the wooden churches were destroyed. The cathedral in honour of the Chernigov-Gethsemane Icon of the Mother of God was used as a storehouse, while the Caves served as a prison for some time. Nobody took care of the place, so this architectural masterpiece was in a very bad condition when in 1990 monastic life was revived in the monastery, which became known as the Gethsemane Chernigovsky Skete.

Since that time, with God’s help, a huge amount of restoration work was done. Water was removed from the Cave Dwelling and the two cave churches, which were previously flooded, the walls were strengthened and repainted. A 70-meter-tall bell tower was rebuilt in the same manner as it had been originally planned by the architect, two beautiful chancels, located by the both sides of the main structure: churches in honour of St.Nikolas of Myra and Sts. Constantine and Helena. The monks’ cells and St. Barnaba’s wooden house, which was miraculously preserved, were all repaired. The Cathedral was restored to its former grandeur.

In 2012, the Kinoviya was returned to the Orthodox Church and thorough restoration works are being done in the temple, which was turned into a sewing factory with a boiler plant in the cave church during the Soviet times. At present, the restoration of the church in honour of the Bogolyubskaya Icon of the Mother of God nears completion, services are held once a year in it.

The Gethsemane Chernigovsky Skete is open for pilgrims wishing to pray at the shrines, such as the miracle-working Chernigov-Gethsemane Icon of the Mother of God, the relics of St. Barnaba and monk Philipp, as well as for those looking for information about the rich and interesting history of the Skete.

In a small canteen, one can enjoy the products of the monastery’s confectionary and kvas shops made of natural ingredients.

5:30 – a brotherly prayer at the shrine with the relics of St. Barnaba

10:00 – prayers to Sts. Peter and Fevronia, St. Matrona of Moscow and All the Saints

11:00 – a prayer of praise to the Most Holy Mother of God at Her Chernigov-Gethsemane Icon

On Sundays and feast days the Divine Liturgy begins at 8:30